Lord Vishnu is the most popular god among the trinity, this is a prayer used to worship of Lord Vishnu. It has to be recited in front of Lord Vishnu to get a peaceful and happiness life.

The Stuti or Vandana Mantra – 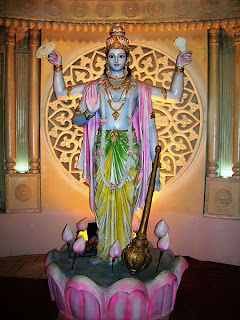 Meaning - I bow to Lord Vishnu the One Master of the Universe, who is ever peaceful, who reclines on the great serpent bed, from whose navel springs the Lotus of the Creative Power;

Who is the Supreme Being, who supports the entire universe, who is all-pervading as the sky, who is dark like the clouds and has a beautiful form;

Who is the Husband of Devi Lakshmi, Whose Eyes are like Lotus and whom the yogis are able to perceive through meditation;

Who is the destroyer of the fear of universe and Lord of All the universe, I again salute to you.